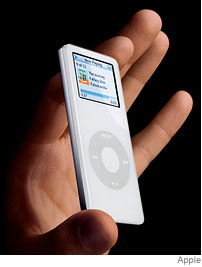 The classy iPod turned 5 today. Though I got my one of my own just a year back, I cannot but appreciate it every single time that I use it. The iPOD is a testimony to Apple’s creativity and ingenuity, things that are in short supply in their erstwhile competitors.

Not only is the iPOD so sleek and compact, its LCD display interface is crystal perfect. Never mind if I have to recharge the battery more frequently. The first time that I saw a image tag of a song in its entirity on the screen, I was stunned to see such clarity, and that too on such a small scale.

Apple was clever to separate iTunes and the iPod. Adding, updating and deleting songs can all be done on the computer, and the iPod is to be used only for listening. I doubt if any other company could have come up with a clear and smart separation like Apple did. Not to mention that the sound quality is almost as good as that of a Bose audio player.

There are many copycats trying to bring out their own versions of the music players. I really doubt if any of them will be as appealing and enduring as the iPod
is. Steve Jobs and the guys at Apple must be congratulated for giving us a smart , sleek and sexy device that I have thoroughly enjoyed 🙂