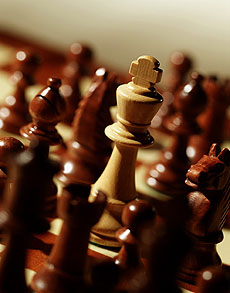 Not too long ago, it so happened that I approached a teacher for a seemingly unconventional problem. Some may prefer to call it a sea of blues. Inability to concentrate fully in class, a study timetable in absolute tatters and an unrestrained, flaring temper were just a few symptoms. The aforementioned teacher, whose sagacity I deeply admire, looked up at me and considered me for a while. She then pointed the finger of suspicion on stress. The very idea of a student suffering from stress seemed ridiculous to me at that moment. But as I discovered at my own cost later, she was very much correct.

It is only natural in these circumstances, that one wonders why school life was so much different. I used to travel the same distance to school, have similar working hours and similar academic loads. Yet, despite all of this, the question of why school was so much more enjoyable compared to college remains unanswered. Palpably absurd? Not in the slightest.

The answer to this perhaps lies in the transition from teenage years to adulthood, where priorities and attitudes undergo a sea change. As one enters into the realms of adulthood, the influence of wild teen hormones somewhat diminishes (although not completely) and reaches a plateau. I believe that this transition is of paramount importance in the life of any individual, and the challenges during these crucial years have to be enlisted, and dealt with all the advice and wisdom that one can muster.

During these transition years, career and social goals are often uppermost in the minds of most people. I take these to be obvious. But as with so many things in this ever-changing world, the challenges that one faces during these years are so crucial, that they invariably decide the direction of the future. They can mould you a bright future, or leave you crippled for life –a fact that is all too often taken lightly.

Whilst one of the main challenges is to maintain a balance between academic, extracurricular and personal activities, an even greater challenge is to achieve this in the most stress free way possible. As school kids, we stick to our daily regimen without complaining and lead relatively stress free lives. But transition into adulthood brings along with it a whole host of choices, and we become slaves to bad habits, laziness standing out as the most prominent.

It is beyond doubt that a certain minimal amount of stress is unavoidable and cannot be eliminated. The BBC’s documentary “Explorations” apocalyptically warns that stress hormones will ultimately ebb the immune system and prove to be fatal to human survival. Stress, as I would put it, is clearly a major challenge in the life of any young adult and one must learn to deal with it adequately.

Early adulthood also marks the period of peak intellectual growth and physical prowess. This is a time to expand one’s intellect and creativity, to form opinions and to vouch for strong personal beliefs. Yet, I regret to say that most universities in India, needless to mention the VTU, have done next to nothing to stimulate creativity and enhance one’s intellect. Churning out record number of professionals every year with strong technical backgrounds, but with little creativity and a primitive mindset is like having a fully adorned chariot without the horses. It is a complete travesty and is utterly meaningless. For any young undergraduate such as us, the ability to widen one’s horizons beyond the walls of academics and university syllabi should clearly be a major challenge.

Having said the things that I have above, there is one other challenge whose importance comes above all others. The immensity of this challenge is such that it applies equally to any other person as it does to a young adult. Perhaps the greatest challenge facing the young generation today is to develop qualities of tolerance and rational thinking. In a world ruled by hate-ideologies and uncertainty, where malice and violence are in blanket abundance, tolerance and empathy are indispensable. This is an age where petty politics, personal vendetta, factionalism and patronage systems are in dominance. India has 600 million people under the age of 30. If these young people are to change the course of the future of this country, they cannot do it without these virtues.

Tolerance towards the views, rights and achievements of others, empathy towards parents (albeit with a generation gap) and others alike are key traits, which every person should try to emulate. If one becomes a major in software programming and achieves high academic feats, but has little tolerance and empathy, then his education is as useless as a one armed juggler. I’m reminded of the words of the great Helen Keller, who once said “The highest result of any education is tolerance.” I suppose it is needless to elaborate further. Helen Keller is undoubtedly right, and if we go by her words above, then George Bush and Tony Blair hold the dubious distinction of being the most illiterate leaders of the west to have been reelected twice.

I’d like to conclude by saying that college life is a time of excitement, triumph and personal happenings, as well as one of great many challenges. Anyone who ignores these challenges or is oblivious to them is doing so at his own peril. The ominous task of balancing the various chores of life, of fine-tuning the mind and carving our own pathways to the future is daunting no doubt, but not unachievable. There is a vast difference in being child-like and in being childish. I’m convinced that these challenges, when dealt with the right approaches, will contribute to a bright future for oneself, and an even brighter future for the wider world. As we pass through the rough stretches of college life –with its new opportunities and experiences, we must tackle these challenges.